Hey all! I received the privilege of publishing an article on Self Talk the Gospel, an online writing community that I had been interning with as a Content Curator during the previous six months. I wrote a guest post for their Impressed Series, in which their writers describe an experience with a piece of literature that left a lasting impression.

For my article “Keeping Faith While in Despair,” I chose to write about Soren Kierkegaard’s book Fear and Trembling (even a year since graduation, my humanities classes are still ringing in my ears), along with my experience of faith and spiritual depression. Here’s a snippet:

Finally. I had finally encountered a fellow lover of wisdom and member of the Christian faith who told me that the authenticity of my faith doesn’t depend on how I feel before I go to bed at night, or how I feel during worship at church. That my choosing faith is what matters, as opposed to depending on whether or not I feel like I have faith.

You can read the rest of the article by following the link here. If you’re curious about topics of Kierkegaard, the nuances of spirituality and faith, despair, and/or my writing in general, check it out!

There was a lull in the swell.

Look! Dolphins. I lifted my hand dripping with saltwater to point out the dorsal fin tips peeking out of the watery blanket, not many yards from where Jordan and I drifted.

My brother is an extrovert. He laid belly-down on his surfboard and started paddling toward the grey-skinned mammals. I began to follow. There was an exciting fearful tension of wanting to get close and stay far away at the same time. I am an introvert.

We paddled close enough to hear the sputtering sound of blowhole exhalations. I wondered if they could sense us, what they regarded of Jordan and I. wondered what their underwater world looked like. I regarded them as creature cousins, physically categorized as cetaceans, yet connected to us by a mix of sibling DNA and spirit capacity.

The scene made me think of a book I had read when I was young, Island of the Blue Dolphins. I barely remember much about it except that there was a tribal girl left to fend for herself on an island, and a lot of imagery of sun-bleached whale bones.

The dolphin brothers seemed unthreatened by our presence. Their smooth grey backs passed by us calmly, the same way the humpback whale swam by my uncle’s boat when we were giving my grandpa’s dust back to the sea. The way he said goodbye with his whale tail waving in the sky, slowly, nonchalantly.

Is coming up for air by works or by faith? I was baptized by my own volition in the ocean. An overcast day off of Santa Cruz. In the name of the Father, Son, and Holy Spirit. They said getting baptized was like dying and coming back to life. I wonder if it is regarded as literal by some people, similar to the Catholic Transubstantiation. It makes me wish Pastor Chad would have held me under longer so I could remember what dying felt like. Seems that I have been baptized many times since then, with the countless times of getting tossed by rough close-outs, under and back up again, like a soggy ragdoll. That’s when I really knew what resurrection felt like, when I could come back up to breathe again. But maybe that’s by works, not faith, so it wasn’t supposed to count?

Is coming up for air by works or by faith? Someone had asked the same question to Dr. Culp during his lecture.

Well, technically, breathing itself is αργος, so what do you think? he said, smiling.

Tonight was the night, and the painting was dry just in time. It was carried by four arms and four legs into the meeting hall, to the back wall, in preparation for the exhibition.

It came in an email to wide eyes.
I had barely been praying.
Joseph texted me his congratulations.
But I wanted to ask if he was scared.
Understanding was labor intensive.

I felt the kick and I wept.
Tried to smile so they would not stare.
Elizabeth came to hold my hands.
Her faith was like molasses.
Conversely I was tense as an ambush.

But they had written this as the original design.
The match struck so I lit the candle.
Hands shivering yet resolute.
The census information came in an envelope.
I read it by the light.

Now Advent: arriving.
I stretched and preened my wings.
I followed Esther’s instructions.
Despite the difficult dreams, Joseph was coming.
September came and we got in the car.
On our way to birthing.

out of his mouth came seven words,
seven words before he breathed his last —

out of his mouth came seven words,
seven words before he breathed his last
and finally closed his eyes.

eyes then opened to see
Sin’s Son meeting his gaze
weapons in hand
they battled for two days
gruesome, fierce, breathless —
before he wiped his sword clean
of Death’s cold blood,
ceasing forever its sting.

Third sunrise, awake again,
upon his feet, he left the tomb
consoled sweet Magdalene
and found his friends, restoring peace.

One asked to see his hands
so he stretched out his arms
to bear them proudly
“Thomas, put your fingers in my scars.”

abandoned, alone, beaten halfway to Hell
he was
stripped of his clothes, stripped of his pride
they tried so hard to strip him of his life
but his scars are his glory
his pain a gift for those he loves,
the grave his way to victory
his battle the triumph for eternity. 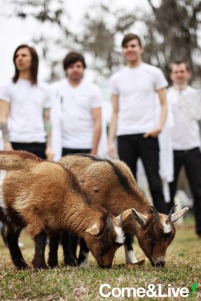 Sorry, Josh Dies, but I don’t think you have that phrase copyrighted yet. Besides, I think I’m allowed to use it since I’m going to talk about how your band Showbread is making a new album for FREE as a result of its new partnership with Come&Live! Records–because that’s truly raw.

Come&Live! is a non-profit organization that focuses on equipping musicians to be more missionary-esque, by using a charity-based income to offer free digital music. Here is a short video explaining their vision in a nutshell:

In March, Showbread announced a statement regarding their departure from Tooth & Nail records and their signing on with Come&Live!

“At this point in our lives as Showbread, we have decided to withdraw from many elements of the industry that have been a part of our band for years, sign with Come&Live! and trust God to provide ways for us to offer our music and our performances as free gifts in order to expand the scope of our ministry. By offering our music as a gift with no charge and embracing Christ’s call to give generously we will open our ministry to anyone and everyone who will take any note of it, not just those willing to pay for it. It is our hope to make Showbread more like the work of missionaries than the work of a professional rock and roll band.”

You can read their full statement on Showbread’s site here.

Well, sure, that’s cool, sounds like a good charity to donate to once in a while, free music is fun, yada-yada. Sounds pretty raw, I guess…

Wait, I’m not finished yet! The deal here is, not long after they joined the Come&Live! family, Showbread decided to begin a fundraiser for their upcoming album, with the intent to raise enough money to be able to create the album for free, with all the studio charges covered by donations.

The project started in late May, with a deadline for August 14 to raise $13,000. Those interested in supporting the project were allowed to pledge money online, on a site called Kickstarter, with the option of choosing a gift according to the amount pledged (for example, $20 would get a special signed CD/DVD).

Eight days later, the full amount had already been funded…and after the full 90 days had elapsed, the grand total of donations amounted to $33, 322. Now that’s what I call raw.

Personally, I was completely amazed at how God not only matched the band’s goal, but completely surpassed it even when no one could tell if the project had any chance of success. Needless to say, the Showbread guys were pretty excited too: